Did I mean what I said? Would I do anything to be cured of Celiac Disease?

Like many things said outside MacDonalds at two in the morning while drunk on tequilla....I don't know if I meant it.

On the disease spectrum, Celiacs sits pretty damn low on the scale. It won't kill you, unless you eat gluten and get colon cancer and that kills you, which technically means that cancer killed you. You could eat gluten while driving a huge boat and the cramps are so bad you fall onto the wheel, jarring the boat sharply left, run into an iceberg, sink the boat, find a floating door to hang out on until help comes but then Kate Winslet shows up, takes the door and won't let you on even though there is plenty of room so you drown, so technically, drowning killed you, you poorly planned plot flaw.


I do want them (and by them I mean smart sciency types) to find a cure for Celiacs but I'm  not sure how far I would go to help them.

Case in point.....An article in Metro discussed a study done by  Paul Giacomin at James Cook University in Australia where he used hookworms on Celiacs and diminished their symptoms when eating gluten.

You read that right...hookworms. I also read the guys' name and totally thought for a second that he was that actor and I was all like 'wow, I loved you in 'Saving Mr. Banks', how did you find time to act with Emma Thompson and run a Celiac study?' but then I googled him and realized I was totally wrong.

Still, running the celiac study is impressive. Want to know why? Because it involved hookworms.

This reads like a freaky reverse hazing challenge. How baaaaad do you want to be out of our Celiac club huh? Are you willing to have hookworms in your gut?

Let's just discuss hookworms shall we? A little bio lesson for you. 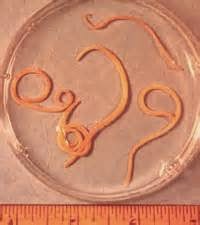 These are hookworms. I tried to find something cute to say about them and yet, I can not. This is them, this is it.....yup....hookworms.
Hookworms are a parasite that stick their little mouths onto the inside of the intestine and suck your blood until you die, true story. 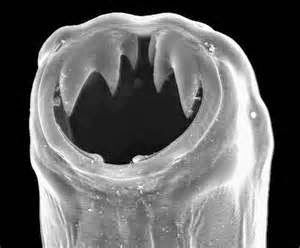 This is it's adorable little face....it looks like that thing in Return of the Jedi that ate Boba Fett.
Now, I know Celiac's are bad asses, I know we are hard core, life on the edge type of people. After all, every meal out is like Russian roulette, but I feel like this is pushing it...don't you?
Let's look more into hookworms.... I will take some excerpts from Wikipedia
"Hookworm affects over half a billion people globally.[2] It is a leading cause of maternal and child morbidity in the developing countries of the tropics and subtropics."
But, hell, if you can eat spaghetti in the hospital, why not right?
Who ARE these people?
"Larval invasion of the skin might give rise to intense, local itching, usually on the foot or lower leg, which can be followed by lesions that look like insect bites, can blister ("ground itch"), and last for a week or more."
'Larval invasion' just makes you think of that weird movie where the bugs mutated into human sized creatures that attacked people in subway tunnels doesn't it? Would I like something called 'ground itch' in exchange for eating a subway sandwich? Ummmmm, let me think long and hard about that one....NO.
How did this guy find people to DO this for him? Did he have a 'Celiacs Only' Party and roofie everyone and while they were under, shoved worms up their ass?
This one, is my favorite so I saved it for last.....
"They mate inside the host (that's you), females laying up to 30,000 (that's thirty thousand) eggs per day and some 18 to 54 million eggs during their lifetime, which pass out in feces (poop). The larvae are able to penetrate the skin of the foot, and once inside the body, they migrate through the vascular system to the lungs, and from there up the trachea, and are swallowed. They then pass down the esophagus and enter the digestive system, finishing their journey in the intestine, where the larvae mature into adult worms"
I have to admit, this part has me tipping my intestinal hat to the little bastards. This is dedication to your craft right here people. Read that again, they travel UP the body to the esophagus, to then be swallowed to get into the digestive system. I sometimes won't cross the street to get a meal because I am that damn lazy, look at these little buggers! They really want your intestines....a lot.
Have we considered hookworms in the fight against ISIS?
So, in conclusion, as if I have not made my point clear. I don't want Celiacs but I don't want hookworms either. As a matter of fact, I think that we should find a way to give Celiacs to people with hookworms because everyone in their right mind would take a gluten free diet over having a swarm of wiggling, fanged worms in their intestines. Everyone. I would like to talk to any of the study participants (or survivors as I like to call them) and find out what childhood trauma made them think that hookworms in their gut was the right path on that particular day.
So Paul Giacomn, thank you so much for your extra effort on this one, but I will not be trying you Celiac cure....ever.
PS. You were the only good thing about 'Lady in the Water'
Posted by Laurie Lyons at 07:54 No comments: