I was on the ball today. Yeah. That's right. I had my shit TOGETHER for the first time in...well... what, six, seven years? It was one of those days that everything clicked. I was sick all week and the antibiotics finally kicked in so I had tonnes of energy, did yoga, hiked with my daughter, visited with friends, organized a drawer, dinner was good and everyone ate it, I am totally prepped for a week of work, lunches made. I was ON. THE. BALL today. So, what did I do about that?

Of course, I ruined it.

I, in my infinite wisdom, thought that I should look at Pintrest.

While riding the high of organization and an empty hamper, I made the fatal mistake of looking at Pintrest.

And I found THIS Pin. Now, let me just make it clear that other recipes that I have done from this site have totally worked for me and I'm sure someone else would be able to make Gluten Free pretzels. They rock. I suck. That's the bottom line.

I should have known better but did you see the pictures on there? GAWD! Those soft, stretchy, golden brown pretzels? How great do they look?

So I did it. I royally fucked up the pretzels and now, my friends, grab a glass of wine or a pipe of crack or whatever you need and enjoy my utter, dismal, failure that is....Fuck you Pretzels.

I need to make it clear to you that I can bake. I am an exceptionally good baker. Really really good. I will never be a physicist or fully understand how a gas pump works but I can... bake.

Except for today, today I accomplished the equivalent of wearing a Kanye Yeezy outfit to Parent Teacher Interviews. I shit the bed.

I followed the recipe perfectly but I rarely use my yeast anymore. Look where it was in the pantry, hiding behind the lost, dejected can of beef stock. Poor little bastard.

Now, stop your hen clucking. The yeast was still active. I checked. So don't blame this failure on the yeast. It was fine. Trust me. Like I said. I can bake.

So, I begin the process of following the recipe. I wake up the yeast and I cut in the butter then I mix everything together and at this point, I have to admit, I suspected that everything was going badly. The texture of the dough was 'off' and by off, I mean, it felt like that weird dirt on a baseball diamond. Yeah. Yummy right? 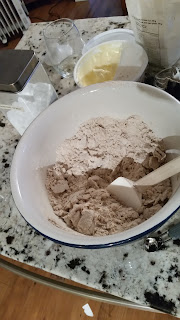 Not good. Not good at all. Note wine glass in background.

I didn't give up though! Would you? Of course you would have because you have the common sense of a goat. I, can not claim such a talent.

In order to convince this powdery bullshit to stick together, I added a little water, then more, and more and more until it finally turned into something that resembled a dough. Actually, it still resembled old crusty playdough circa 1987 but I stuck with it. 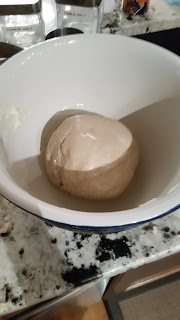 See? It doesn't look like the seventh circle of hell now does it? Trust me, it's like one of those things on Alien that lay in rest until the host least expects it and then it jumps out and gives you the worst tummy tuck ever. This is a ball of destiny.

You, of course, have to let it rise. So I do. Does it? No. No. No. Of course not. It just sits there, nice and warm, looking at me with distain and judgement. Laughing at me. 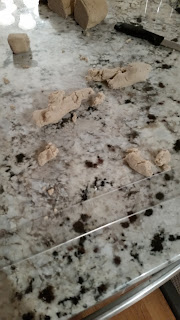 Do you like how I pulled out the ruler, as if I could measure this monstrosity? I'm delusional. A crazy person. So do you think they look like pretzels? Hey?

Okay, so at this point, I regroup and decide to try to make something different. I decided to make pretzel 'bites'. Like that's a thing. Pretzel 'bites' like bagel bites or snack bites. I crack me up.

I cut some into rectangles, I tried to ball them up but basically, I didn't make gluten free pretzels.

Do you know what I made?

I made dog food. 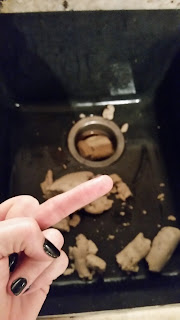 I threw out the rest of the dough and as you can see, I was really enjoying myself at this point. I was really feeling that housewifey glow that you see on commercials. I. was. loving. being. a. Celiac.

I boiled them and baked them and as a perfect ending fuck you, the fire alarm went off to notify the house that the dog bisquits were ready. 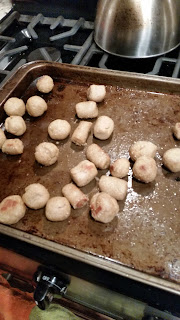 Wow. This is a new low bitches. THIS is the worst thing, ever made by anyone, anywhere. I swear, the garbage they make reality stars eat on deserted islands which is basically shark piss, coconut husks and Gary Busey's ball-sweat, is of better quality than this shit I made.

What do I do now? Nothing. Throw it all out, drink some more wine and eat a brick of cheese.

I consider that a win so after all that, I still nailed it today. I got all my shit done and I tried something new. I failed. Meh. Fuck it.

Posted by Laurie Lyons at 19:40 No comments: