I think people who take joy in others failures are the shittiest type of people. I think we can all be a little petty at times; that chick at work who is always in the bathroom fixing her makeup rather than working falls in the mud and we feel a little surge of glee at her new appearance or that boss that was always so shitty to you gets fired himself, we feel happy that they are sad. These are minor examples and I think it's just human nature. There are people though that feel genuine happiness at others sadness and it is a routine, common personality trait of theirs. I don't like those people and I think that bloggers can be those people.

That's why I have to be careful. I always try on my blog to be funny and charming and educational at the same time. I try not to be mean. I know some bloggers like being mean, I know they wield this forum like a weapon and I desperately do not wish to be one of those people.

I have some bad things to say about some products and I was so hesitant to say them because I think the people that make the products are  most likely super wonderful people and I don't want to hurt their business.

But I have to be honest.

My family camps almost every single weekend in the summer and I am always on the look out for great GF finds through my fine province of Alberta. On our last trip to Gull Lake, I realized that I was very close to Lacombe where the Totally Gluten Free Bakery is. I first met the Totally Gluten Free Bakery at the GF Expo and fell in love with their bread. It was fantastic so when I had the chance, I loaded up the spawn and hit the road to the Totally GF Bakery. 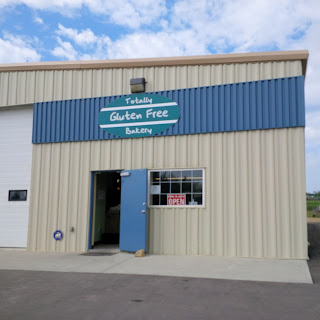 I always find it exciting to be going into a store whose shelves are stocked just for me. I am literally like a kid in a candy store and maybe I come off as too forward when I walk into a GF store but I always expect to get into a lengthy conversation about the products and the owners of the store. This usually happens very organically and often I let them know that I write a blog somewhere in the conversation.

There was no chatting at the Totally Gluten Free Bakery in Lacombe. The store itself is spread out in a lovely manner, it is bright and clean and even has a little seating area. It was the staff that made it unwelcoming. Here is how the conversation went:

Girl appears from the back of the store rolling eyes at my presence. (albeit I had two loud boys with me who at the time were most likely making fart noises BUT they weren't running around or breaking anything)

Me: Hello! I love your store.

Me: I saw you guys at the GF Expo in Calgary. I love your bread!

Me: Yeah! I have never been here. So what do you have?

Am I asking too much for a few recommendations or a quick tour of the store? Maybe or maybe not, depends on whether or not you want me to come back I guess. I shop around for a while and grab some things. There are tasters of some waffle thing and I try one.

Her: Silence - opportunity for talking up and selling what ever waffle thing that was is lost

I bring my things over to the counter. She doesn't make eye contact, doesn't even tell me the amount, just sees my debit card and pushes the machine towards me. The boys were still making fart noises but it was actually a little funny.

Me: Well thanks a lot! Have a great day.

Her: Yeah  - do you want your receipt?

SIDE NOTE - Celiacs ALWAYS want the receipt because we claim our purchases.

So we left and I took another little waffle thing for the road because they were so good, I would have bought them and much more if a little effort was made. I doubt that this is the way the store is every day and maybe I caught them on the "we had to call in zombie girl because all the cool kids were sick" day but I am in no hurry to return to the Totally Gluten Free Bakery.

I do love the bread from there, the cookies were dry and I think had been sitting too long but the cheese buns were amazing. I also bought a package of Stellas perogies because I love perogies and they were almost more disappointing than the store experience.


Maybe I got a bad batch but this is what happened to the first three I cooked. The next three were better but the flavor just wasn't there. The filling was bland and lumpy and the dough was spongy. Sadly, I would not recommend these either.

So it was a bit of a bust for GF shopping this weekend. Again, I am not being mean for the sake of making someone sad, I am just telling my experience as it happened.

I don't think I would make the trip back to Lacombe. Maybe everyone else has had a different experience. Let me know here or via twitter @afreakingceliac

I wasn't born in Calgary. I didn't move here until I was fourteen years old. It wasn't for lack of trying though. My Mother was born here, moved shortly after getting married and spent the next twenty years trying to get back. When I was a child, I didn't know that Calgary was the name of this city, I thought it was called, 'home'. I swear, that's a fact. We would ask our Mom where we were going and every time she would answer, 'we are going home.' So I honestly thought that was the name of Calgary. When I finally moved here, I understood what she was talking about.

Calgary became my home and I quickly embraced the culture. I had been to a lot of Stampedes before I had moved here and seen every Stampede parade, even if it was just on TV, I saw it. I have to tell ya, I loved the bands. I loved the bands more than some girls loved Kirk Cameron before he turned all weird and 'I can hear God's thoughts'.

I was terrified when the Drum Major Dan watched me sight-read a piece of music, even more frightened when we were put in groups to follow a machine gun fire of marching instructions and didn't sleep until I got my letter informing me that I was a member of this elite group.

The Stampede Band taught me dedication, loyalty, teamwork and exactly what I am made of. Qualities that at eighteen are more valuable than gold. Mostly, it taught me how amazing the Calgary Stampede truly is. I know the Stampede like the back of my hand. We spent every single day there for years and would have at least ten performances a day all over the park. When we weren't rehearsing, or trying to get a nap and a meal in, the Stampede members were roaming the grounds taking in all that it had to offer. I loved every single second of it.

I traveled the world with the Band and everywhere we went, people knew who we were. Not in some vague 'I think I saw them on a lame cable access show' sense but in a real, 'holy crap the Stampede is awesome' kind of way. It was pretty amazing at the age of twenty, walking down a street in Sydney Australia and have people come up and ask you where you were performing next so they could be there.

The Stampede has been a symbol of this city for a hundred years and when flood waters ravaged the Stampede grounds two weeks before the Greatest Outdoor Show on Earth the city was in shock.

We often call Stampede 'Ten Days of Glory' but this year, the ten days before the Stampede were the highlight. It took everything this city had to make the Stampede happen and walking up to the admission gates I sure hope that I wasn't the only Calgarian to get a lump in my throat seeing it all laid out as if nothing had happened.

This city is nothing short of amazing and being an alumnae of the Showband and watching my band march the parade on streets that a week before were knee deep in water was a wonderful sight. Watching them dazzle on the Saddledome steps that days before were underwater was a powerful thing.

Pride doesn't sum it up. I don't know if anything could.

So please, if you haven't gone down to the grounds, you need to get there. If you have Celiacs you have LOTS of options. No, I'm not kidding, you have lots of options. The Avatara Pizza people are there, amazing GF pizza.

Add to that popcorn and cotton candy and you have yourself a party in your belly. If you are looking for something healthy, the Hidden Valley Ranch booth near kiddie land has salads for a dollar. 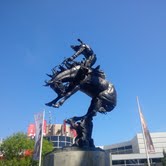 Please get down to the grounds, even if you are one of those 'I don't do stampede' misers. Not only because people come from all over the world to see what you have in your own back yard but because the world is watching. And when the world is watching, this city, and its Marching Band steps up - trust me, I've been there.

Posted by Laurie Lyons at 19:18 No comments:

Dunk that Donut Bitches - just not at Timmys!


UPDATE - Tim Hortons has failed me.


I wasn't expecting to get a letter from the president or anything. I WAS hoping for a little something along the lines of 'it's something we are planning on in the next three years' or some shit like that. This letter reads like the most polite 'go fuck yourself and your diseased ass' I have ever read. I don't think that we are going to see a GF muffin at Tim Horton's ....maybe ever.

I thought that once I threw it in the mix with the likes of Dunkin' Donuts, that they could hold their own. Not so. 1 in 133 Canadians have Celiac Disease and more are looking for a Gluten Free diet because they want to be cool like us Celiacs. I thought Tim's might give a little shit about that. Not so.

Don't get me wrong, I am still swinging by the drive through for a Medium Mocha Iced Capp today. Because they are delicious. I just wish I had the option of having a donut too.