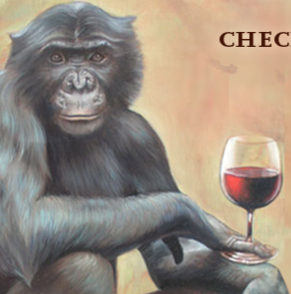 Our adventures in Halifax continue. Don't worry Haligonians, I am only here until August so you won't have to put up with my 'aggressive' driving forever. 'Aggressive' here meaning, 'driving the speed limit on a dry sunny day'.

Case in point, Friday night, our friend Marlaine came into Halifax to visit. She is a flight attendant, but Trevor went to high school with her so we have known her for years. She's also in Roller Derby and convinced me to try it when I get back to Calgary. Trevor is hesitant of this plan. I can't imagine why.

We decided to go to The Wooden Monkey, a restaurant in downtown Halifax that focuses on locally grown, organic food. It's menu even has notifiers for meals that are Celiac safe. Think about that. CELIAC safe. Not just 'Gluten Friendly' or 'Gluten Aware' or 'It's Complicated' which is what is on Gluten's facebook page. That's because Gluten is an indecisive whore if you ask me.

The Wooden Monkey actually uses the word Celiac, which is awesome. The only bad thing about it is that I couldn't decide. Usually, I only have about 2 choices on a menu and one of them is always green salad. To be given so many choices was almost overwhelming. I know how Heidi Klum feels in a Victoria Secret now. It was dizzying.

I finally decided on the Scallop Pasta. It was fantastic. Like really awesome. The pasta was tender and it didn't have that creepy starchy taste that a lot of GF pastas do. The scallops were good. The sauce was a nice texture and full of flavor. My only disappointment was that I asked if I could have some kind of garlic toast or something because I knew they had GF bread but after checking, the server said that she would have to serve it as a GF bun with butter on the side and garlic in a bowl on the side as well. I thought this odd considering that they served GF burgers and sandwiches that they couldn't butter a bun to go with a plate of pasta. For dessert, they have a tofu chocolate pie which was to die for and I usually despise tofu.

Service was okay, she was sweet and eager to please. I asked for a recommendation and she didn't really have one off the top of her head. She didn't have a great deal of food knowledge though and had to keep going back to the kitchen to ask questions. We weren't asking hard ones either, I feel that the server should know how the chicken is prepared. She wasn't sure about the desert and had to ask about it too. However, I would always prefer a server go and ask the kitchen than make something up or not give a crap at all.

I was thrilled with the Wooden Monkey. However, Trevor and I don't always agree. We agree more than Tory Spelling and her husband agree on the use of tranny's in a marriage but we don't always agree. Trev was less than impressed with the Wooden Monkey. He had the roasted chicken and a coffee. He was underwhelmed with the portion size of his plate. He only got two small chicken legs on a huge pile of mashed potatoes and the veggies were hiding in the mash. Trev's opinion was that the price was fairly high considering the small amount of protein on the plate. He also had to ask for every single coffee refill he got. Which even I admit, got a little irritating. He felt that for a $3.00 cup of coffee, refills should come fairly regularly. Trevor didn't feel that the portion size or the service reflected the price point at the end of the night.

We did agree though that it was good to see our friend Marlaine because she is fantastic. I will certainly be back to the Wooden Monkey because I feel like I should try every single thing on the menu but I don't know if I could get Trev to come back with me.