Halloween is NOT my favourite holiday. Please don't hate me and egg my house. Even when I was a kid, I wasn't a fan of the costume. I remember stomping around the house rolling my eyes as my siblings suggested costume after costume. If there wasn't a pillow case of chocolate at the end of the road, I wouldn't have bothered at all. Now as a grown up, I do enjoy dressing the spawn up.

I like finding the 'just right' thing to make their costumes extra special. although, I may have passed on my lackadaisical attitude to my kids. When my son was 3 he refused to wear a costume. When we gave option after option of dress up ideas he would respond with, "Ethan will be Ethan on Halloween like every other day." Trev and I had to shrug and agree that this was true.

In the end though, he agreed to dress up as Woody but (like me) it was only to get the candy. Still at every house, when the neighbour would say 'Oh look! It's Woody!' he would take off the cowboy hat and exclaim, 'No, it's me Ethan.'

The boy would play our game, but on his own terms.

Now, they both love dressing up and I make all the magic happen. I am even making little glutened cookies for them to bring to school that look like witches. I love Halloween for the kids, but there is something extra creepy about seeing grownups wandering around dressed as Tinkerbell or a dog.

Again though, there is a sack of candy at the end of this road and I don't even have to ask for it. Like all parents, I will shuffle through my spawns' pillow cases looking for razor blades and heroin needles. Instead though, I shall steal as much as possible from them as I can. I consider their candy donations to me payment for services rendered for a great Halloween.That's the way I roll.

Just because we have Celiacs doesn't mean that we can't steal as much candy as we want.


Happy Halloween, now, go steal your kids hard earned booty to teach them you are bigger, stronger and have more money. 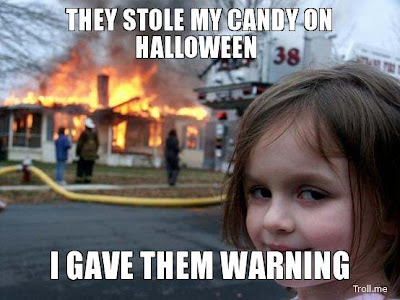