I need to start off with an apology, which is how I start off all my interactions with my priest. I haven't posted in what feels like forever, and I am sorry about that. I have some good excuses though, one that includes a arm/hand/tendon issue which has caused me to spend my summer in a lame ass brace and a sling. I never realized how much I clap like a toddler when I am delighted until it started to feel like my wrist was being tazed every time I tried. My laptop also crapped out which involved a bunch of googling and cursing at the blue screen of death that then turned into the black screen of death to punish me for having the audacity to think I had some level of control over technology.

After lots of acupuncture, cortisone shots, chiro, and swearing, the arm is feeling better and I'm going to try typing until it starts to hurt again. 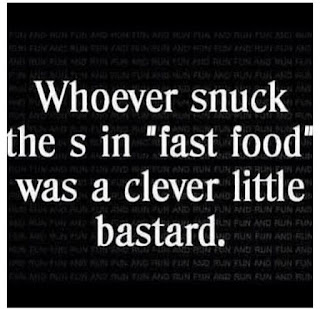 Fast food is all about convenience. It's a staple for quick work lunches, road trips and late night cravings. In general, I wasn't a fast food gal before my Celiac Diagnosis but I had my favorites. There are days that I would sell my fingernails for a Big Mac.  Man, I could crush a Big Mac like a snake eats a rat. Now, reader, this is very important, don't send me a recipe for a 'gluten free' version of a Big Mac because despite your best intentions and wishing IT WILL NEVER BE THE SAME! Stop now....now. When I respond to you, I will make you cry....and it will be your own fault.

We all know fast food is bad for you right? Right? It's full of fat and sugar and ground up barbie doll arms or something...I don't know. We all know that, except for the people who have sued the fast food chains because they got fat from eating there three times a day for ten years. They don't get it but we do. That being said, people still eat there and if you eat there occasionally, it most likely won't kill you. So, most people take advantage of this occasional gluttony on overly scheduled days, on road trips and any day that mom runs out of fucks.

For Celiacs, there are few options for fast food. We technically can have the chili and the baked potatoes from Wendy's, the fries from Wendy's and McDonald's, and salads at most places. I say technically here because in a perfect world, (one that doesn't have any lip plumping videos on YouTube) Celiacs can go into a fast food chain and consume these items. In reality? These foods are not prepared with Gluten Free-ness in mind. Therefore, it is entirely possible that someone accidentally dropped a bun in the chili trough and/or, someone cooked chicken tenders in the fry fryer thus making it all inedible for us Celiacs. So what do you do?

You go to Freshii that's what.


Someone told me about Freshii a while ago and I somewhat dismissed them because the thought of buying anything from somewhere that you can order and receive in minutes usually makes it non-Celiac available. However, a couple weeks ago, I gave it a shot and man was I happy about that.

I dread going to new places because I feel very uncomfortable being a pain in the ass. Maybe it's all my years as a server, ones that are peppered with memories of overly demanding customers who insisted upon the red peppers in their salad being cut at a thirty-five degree angle and yet completely square. This awful person actually exists and presumably is still out there, torturing restaurants far and wide. I don't want to be that person, and although I am gracious and charming about my food ordering, I don't know how much my attitude of gratitude makes up for my high needs.

In general, my personality rarely makes situations better. I'm not working on this as a personal goal.

I walked into the Sun Park Plaza Freshii location with the same trepidation and wide smile I always use when approaching a new restaurant, asking softly about what options they had for me. There was no need to be worried. A lot of the menu at Freshii is Gluten free and anything that isn't can be made Gluten Free. The best part is that it's no problem for them to take things out or replace them with something else, because they make everything ....wait for it...fresh. Hence the name I would assume. I amaze myself with my intellect sometimes.

You watch the Freshii staff make your items and you can revel in the care that they take to make sure that it is safe for a Celiac to eat. The Freshii manger walked me through all my options and let me take several of the sauces before deciding. I had the Mediterranean bowl with chicken added on and it was amazing. I (once again) forgot to take a picture because when I get hangry, I can't really see straight but trust me, it looked just like the picture on the menu. Like exactly. I truly loved the whole experience and I'm so grateful that I get to have a 'fast food' option that is convenient and actually good for you!

I will be visiting Freshii ALL the time now. I'll be there on days where I'm; over scheduled, over tired, overwhelmed, hung over, underfed, under medicated, cranky, drunk, out of groceries, out of patience, out of time, and out of energy which is every single Tuesday since I gave birth to the first spawn fourteen years ago. So Freshii is a welcome change for this former McBitch, now I'm just plain Bitch, which, let's be honest, is accurate. 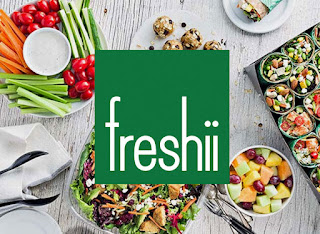