Since being diagnosed, I have developed my own version of the hunter/gatherer complex. I used to just be content with a visit to Costco, a truck load of food and the account debited a mere mortgage payment. Now, though, it is simply not enough to hunt for the best deal or the largest bag of Cheetos ever made, I have to find the Gluten Free version of it. I feel my happiest when I have found something that is not only good for me but won’t kill me. The kids have basically run out of patience with this shit. I actually had to leave them in the car on my latest venture. If I had brought them in, they would have just acted shitty and then I would have had to threaten to kill them and look like an asshole mother. So there they sat in the parking lot, totally wrapped up in their hand held video games that Santa brought because really, what other item says the birth of baby Jesus but something with a stylus?

I searched Urbanspoon for Gluten Free Friendly places and came up with a deli on Canyon Meadows called “Sofrittos”.

I have to say that it was pretty cool. The manager came out and walked me through all the items they had that were Gluten Free. He was dead honest with me that they make their own pasta in the same space that they make the gluten free stuff. He went through the steps they use to ensure that there is as little cross contamination as possible. They have a few types of GF crackers, most notably, The Kitchen Table Bakers Rosemary Parmesan Crisps. Which aren’t really crackers as much as baked circle of cheese AKA a party in my mouth. They also have lentil chips from Mediterranean Snacks. I got the Cucumber Dill flavor and they are going down pretty easily while I write this. They had chorizo and corn pasta too. They make their own homemade regular pasta and they looked so good that I had that crack addict style pang of yearning for a good old bowl of ravioli.


They make a bunch of Gluten Free sauces which will be great in a pinch to grab and bring home to make with my corn pasta. They also have ready made meals. I, being the laziest housewife in the western hemisphere, leapt on this opportunity. There was veal, and duck and beef and lamb. I chose the lamb for Trev and I for dinner. Please people keep your “its someone’s baby” crap to yourself. I get that I ate a baby sheep for dinner, I don’t care that it had feelings or a love of sunshine or liked it when someone read Dr Seuss to it. I care only that it was delicious. The lamb was tender and cooked perfectly and the sauce was delightful. Trev was additionally thrilled that he came home to something that looked like I gave a shit. Not that I give a shit, but it LOOKED like I did and I think that’s the trick. 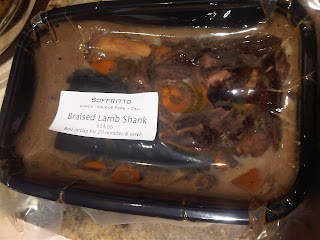 This is what the meal looks like when you get it. All you do is boil it for 20 minutes. I steamed some broccoli and pulled off a June Cleaver-esque dinner. It was great and I will be back to Soffritto when I get slothful again, which, let’s be honest, will be soon. My hunter/gatherer need fulfilled, I shall unplug the spawn and force them to spend time with their lazy mom.