A Big Bowl Full of Memories

It's a happy day in the Lyons household.

Let me back track... as a child, on special occasions, my siblings and I were allowed to pick a flavour of sugary cereal. So for Easter or Christmas or maybe even for our birthdays we got to get a cereal that we learnt about from some loud and brightly coloured commercial. Now, let me preface this by making it clear that I did enjoy our treat cereal every once in a while because really, I was a kid and it was a bowl of marshmallows and no self respecting child passes up a bowl of marshmallows on Easter morning. I do remember though that I would always gravitate back to my favourite cereal, Rice Krispies. I have always loved them. Its the food I ate most mornings as a child, as a teen it became dinner and when I was pregnant it was my saving grace.

Rice Krispis are one of those foods for me that hold memories. It reminds me of early mornings with my sister, sitting cross legged on the floor watching Bugs Bunny. We could make Rice Crispies, thus making us practically grown up women. The way we saw it, we could totally live on our own at the age of 8 and 10 because we could make this bowl of crispy rice and milk.

I remember vividly that shortly after being diagnosed with Celiac I thought to myself that at least I could still have Rice Krispies because HELLO, they were made with RICE! I was devastated to find out that Rice Krispies contain Malt....no good. It is one of the few foods that I have had heroin-esque pangs of cravings for. I have thought more than once when I move softly to the kitchen at midnight,  that I would I love a bowl of Rice Krispies. Nothing else seems to fill the void so I usually end up eating a half a brick of cheese and calling it a night.

I have been seeing ads for GF Rice Krispies on the US channels for a few months now. This is incredibly frustrating for those of us in the Great White North. The US gets all these wicked new items and then it takes months or years for us to get them in Canada. All these yummy foods just a border away.  What is up with Jack in the Box and Sonic...yowza those places look intense. I want to be a part of that ice cream slurpee thing they make.

Anyway, I heard at a party this weekend that GF Rice Krispies had arrived. We almost left to go to the store. 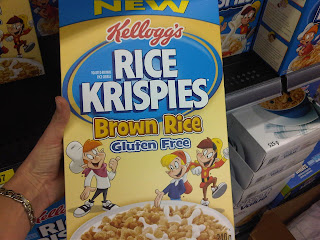 Today, I found them at my local Walmart and I was giddy! I raced home and could not wait to tuck in. I poured myself a huge bowl and of course portioned the milk to the perfect amount and then tilted my head and sighed at that magic sound. It's delightful. They taste almost the same....but....better! I know! It's so rare that a GF product is superior but it happened. They hold their texture longer and are crunchier and they are LOUDER! AND they cost less than half the price of the GF cereal that tries to copy them. I sat back, turned on some cartoons and enjoyed my bowl of happy memories. If only my sister were visiting from BC, then it would have been perfect. Miss you Dee.

So it is a fine day in the Lyon's household, I am all grown up and making myself some Rice Crispies. I have friends over for brunch on Sundays and I am SERIOUSLY considering waylaying the bacon for everyone to have a bowl of cereal. They will thank me....really, they are THAT good.
Posted by Laurie Lyons at 21:09