Whip, Puff and Roll the Balls

Turns out, other than my talent for head stands and eating lobster, I have a talent for making cream puffs. Well, it might not be an ACTUAL talent as much as it is a great recipe but whatever. Last week we had friends over for dinner and I figured that I had better attempt to do something for a dessert considering this is the friend who made the GF cheesecake and GF chocolate pies. Basically, the woman could be Celiac and wouldn’t struggle at all. Oh Murphy, you and your laws need a shake-up.


So I flipped through my Gems of Gluten Free Baking cookbook and find the recipe for Cream Puffs. It was fairly easy, mix some stuff, heat it all on a stove, mix again and make into balls. Now, this one calls for 3 inch balls (insert inappropriate childish giggle here) and after making them I think that is a bit big. I think next time, I would make them smaller so that they could be eaten in two or even one bite if you were a porn star. *Minds deeply in proverbial gutter now * Anyway, it only made eight and so I made a second batch so we had about 15 because I ate one.  Ok, fine, I ate two, it is important to quality test.


All you have to do then is let them cool, cut them in half and fill them with whipped cream. I am a bottomless believer in REAL whipped cream. It takes moments to whip cream and yet everyone goes out and buys shit that is packaged to look like hairspray from the 80’s. Why?


Here is a simple Whipped Cream Recipe. Like seriously, this is how easy this is. Don’t buy anything in a spray can anymore.


So I filled my cream puffs with some lovely whipped cream and then dusted some powdered sugar all over it and threw them in the fridge. I was worried that they would get soggy while we were eating dinner but they didn’t and they were awesome. We ate them so quickly that I forgot to take a picture. So I snapped one at the end of the last one after I took a bite of it. 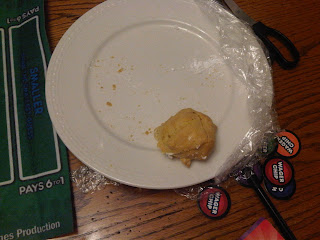 Next time I am going to add some drizzled chocolate too, that would be really good on the balls.


I am adding my talent for GF Cream Puff making to my resume. Go get “Gems of Gluten Free Baking” and see if you have a talent too. Don’t forget to make the balls a little smaller!


Maturity is for assholes.

If anyone wins the car, camera or TV at Tim Hortons, I will take it off your hands.
Posted by Laurie Lyons at 09:08