The Prinicple of the Cheese

I think we all like the principle of things. I love watching the TV courtroom shows where people sue their best friend over 40 bucks just on the principle of the matter. The fact that she borrowed the 40 bucks then went and got her hair done, sent this woman over the edge. We do a lot of things on principle these days, we cut people off because they cut us off and we argue over things we really don't care about in the need to just be "right".

I will eat a whole shit load of cheese on principle.

My brother Robb took me to one of the best concerts I have ever been to. It was Roger Daltrey and he sang the entire Tommy Album plus all The Who hits. Because The Who is my brother's favourite band in the entire world, he bought the diamond platinum VIP package. I have no idea how much this cost but I assume it was a lot. And because I am one of his two favourite little sisters, he brought me.

The show itself was awesome. We had front row centre and spent the whole time on our feet screaming our heads off. If you ever wondered if Roger Daltrey still had "it" I am here to tell you that he does...in spades. Before the show though we got to meet Roger Daltrey and get his autograph and everything. There is nothing like a classic rock star looking at you, opening his arms and saying in that gorgeous British accent, "Come here darling," That's what he said to me anyway, I am fairly sure he said something different to my brother.

We also got to have this little reception thing before hand where it was all you can drink and it had a big buffet of food and everything. I didn't realise that this was going to happen or else I would have called ahead and told them about my Celiacs. My brother most likely did tell me but I stopped listening after he said "Front Row Rodger Daltrey" and started putting on my shoes and lipstick. But almost everything in this room had gluten in it, except for the vodka and the cheese. Therefore, ON PRINCIPLE, figuring how much my big brother probably shelled out for this event, I ATE AS MUCH CHEESE AS I HUMANLY COULD. I drank a lot of vodka too.

I swear, it was gross but I just kept going. I had to, on principle, eat my weight in cheese. It's that feeling you get when you feel like suddenly, the scales are not in your favour and you have to even the score. At one point, Robb looks at the buffet table and says, "Did you take the whole wheel of brie?" I nodded as I shoved a triangle of it in my mouth. "Nice," he replied with approval. The servers had to replenish the cheese platters like three times, it was wicked cool. And don't think that I was making an ass of myself. The Who fans are hardcore and one lady just asked for the bottle of Rye and a straw from the bar. Eating pounds of cheese was really the least form of Gluttony going on in that room.

I could have stood there and demanded that the servers whip something up for me. I could have stomped my foot and caused a scene that how dare they not  prepare for allergies, I could have assumed that the whole world should cater to my problem. But, on principle, I will never do that. And in repayment for my principles, I got to eat my weight in cheese and have a cuddle with a real live rock star.

Stick to your principles but not at the detriment of those around you. The world doesn't owe your Celiac ass anything. 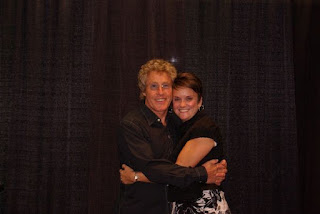 Just cuddling with a Rock Star and my belly full of cheese.