Trev and I rarely fall into the cheesy loser tourist category, except when we go to….The Bubba Gump Shrimp Company.  For those of you who are stupid (offence intended) and can’t figure it out, the BGSC is a theme restaurant based on the movie Forrest Gump. There aren’t any in Canada (as far as I know, but if there is one, don’t enlighten me, there isn’t one in my backyard so I don’t really care if there is one in Toronto) so Trev and I have to go when we are close to one because we are hard core seafood lovers.

Sidebar, this is why I think we should live near the ocean somewhere but alas, Trev’s gotta be where oil is and that bitch mother nature didn’t put no oil in Hawaii… selfish cow. End Sidebar.

I myself have a special given talent for eating seafood, oh you heard me, some people are good at molecular science, others are musical prodigy’s, I could eat one entire lobster in a sitting by the age of 8.  Why my mother never entered me in pageants for this talent, I will never know. I love all seafood, especially the seafood that you have to work for. There is nothing more satisfying than beating the crap out of your food with a hammer and a fancy pair of pliers just to suck the meat out. It tastes so much better when it takes exertion. And between you me and the fence post, I really like the bib too. Seafood is the only fare that comes with clothes! How awesome is that? Free garments! Seafood kicks the shit out of any other food just on the accessory front.

My love for seafood is equally matched by my husband’s love of shiny flashing cups. Now, let me clarify here reader because I understand that my last statement made my Trev sound like a moronic simpleton and there is nothing farther from the truth. The light up cups at Bubba Gumps are - in the simplest of terms - the shit. They are perfectly formed and fit in your hand flawlessly and are the ideal size for what I call a “Canadian triple”. Which is basically, three ounces of the alcohol of your choice mixed with 4 tablespoons of the mix of your choice, neither ingredient matters too much, just the ratio -it’s all about class people.  We don’t drink out of the light up cups all the time but they get sent to the trailer for camping.  I can still feel your judgment, so I ask you dear reader, late at night, in the Canadian Rockies, when the fire is crackling and it’s pitch fucking black near your lawn chair, can you find your moonshine? I didn’t think so! I can!  I can because I have been to Bubba Gumps! We had a pair of glasses that we have been using religiously for two years and during a camping trip this summer, the last one died. Trev was holding it, gingerly; with reverence so it departed this life knowing it was loved. When its light finally faded into oblivion, Trev looked me dead in the eye and said, “We have to go back”. It was very “Braveheart” really touching.

ANYWAY…. We go to BGSC the second night of our vacation. I did not call ahead to see if they had a GF menu because it didn’t t really matter, we were going there if I had to eat the napkins. Julia (the small spawn) is terrified of stupid shit and therefore is scared of the guy dressed up like a shrimp that dances in front of the restaurant. That's right, she is terrified of the server who lost the bet and had to dress up like a shrimp in a top hat….I don’t make this up. So we have to like charge in as if we just stole something or we are taking it by storm so everyone knows when the Lyons Family has arrived. Then we met, Alanna. Hence forth known as “kick ass server bitch” because she ROCKED. I eat out a great deal, and NEVER have I felt like my server was as invested in my health as Alanna was. I have also served a great many tables in my day and I would like to think that I was pretty damn good at it and I can tell when someone is good at their job because they want to be or if they are good at their job out of sheer experience. Alanna is outstanding at her job because she wants to be.

BGSC has a Gluten Free menu in the making and not ready for production so Alanna  basically walked me through the whole menu telling me what is in each and every dish. Her food knowledge was unmatched. Then I picked what I wanted :The Steamed Shellfish - (clearly with out the bread) 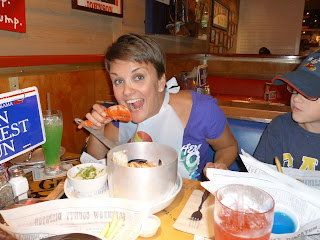 Few things of note here:
A) size of meal  - realized after I finished it that table next to us was sharing it between two people
B) Glowing cup full of green love and rum
C) My kid literally looking at me like I am an embarassing fucking idiot
D) the level of awesomeness in this picture

Alanna, checked every single ingredient, conversed with the kitchen and even went into the cooler to pull new butter for me and make sure that it was safe. Blown away does not even explain our experience for Alanna and BGSC. It was a treat to be so indulged and I was beyond grateful. The meal was perfect, the service outstanding and the cups super glowy.

So Bubba Gumps, thanks for a great meal and thanks to Alanna for all her dedication to my intestinal health, I raise my flashy cup to you which is right now full of Pinot Grigio……I am all class people, all class.